The DMC DeLorean was made by the DeLorean Motor Company, which was founded by John DeLorean. DeLorean was a former automobile engineer and executive, most known for his time at General Motors Corporation and for his creation of the extremely popular and successful Pontiac GTO in 1964. As John DeLorean rose in the ranks of the GM corporation, other executives at GMC grew to dislike his maverick attitude. He eventually he grew tired of clashing with other executives at GMC and retired from the company in 1973 to start his own motor company, the DeLorean Motor Company.

The DeLorean Motor Company was launched in 1973, and a prototype car was revealed in 1976. The two seat sports car, designed by Giorgetto Giugiaro, would become best remembered for its Gull Wing doors and Stainless Steel body panels. The company begin producing a model for sale in January 1981, and production continued until October of 1982. About 9,000 DeLorean "DMC 12" cars were made. 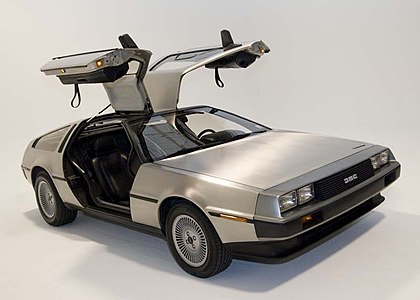 Trouble for John DeLorean and DMC

In 1982, the company filed for bankruptcy due to large debts and arrest of John DeLorean for drug trafficking (DeLorean had agreed to help undercover FBI agents sell 220 pounds of Cocaine as a way to get the money his company needed to stay afloat). He was able to successfully defend himself on the basis of entrapment, but his reputation never recovered. The DeLorean Motor Company was no more, and the car faded from the limelight until its popularity became forever immortalized in 1985 in the film "Back to the Future”.

In 1995, The DeLorean Motor Corporation was born again by Stephen Wynn, who acquired the company name, DMC logo and remaining parts inventory of the former DeLorean. Wynn's company sells rebuilds and replicas of the DMC car for a price of approximately $100,000 each.

The DeLorean Motor company licenses DMC watches, which celebrate the iconic DMC 12 car. These watches continue the heritage of the DeLorean DMC 12 sports car - stainless steel bodies and design inspired by the DMC 12 itself. Take, for instance, the DMC Alpha watch. The horizontal lines on its face honor the DMC 12's front grill, while its dials bear a striking resemblance to the DMC 12's speedometer.

Whether you own a DMC 12 or simply have an affinity to the legend that is DeLorean – these licensed watches will look great on your wrist. Wearing the DMC logo is a great way to show your love for this legendary time travelling car.

Update - Unfortunately, Moosestrum no longer sells the DMC watches, last I heard, the company was no longer making them.